Handmade in the U.S.A.

Truthfully, there’s no such thing as a bad time to visit a national park.

While many people closely associate national parks with summer vacations, these incredible gems have plenty to offer year-round.

However, many parks have a prime time to visit, when their wildlife, geological features, and weather are at their absolute best.

Fortunately, we’ve taken the guesswork out of the best national parks to visit by month so you can make the most of your trip regardless of where — or when — you want to go.

Best National Parks to Visit in the Spring 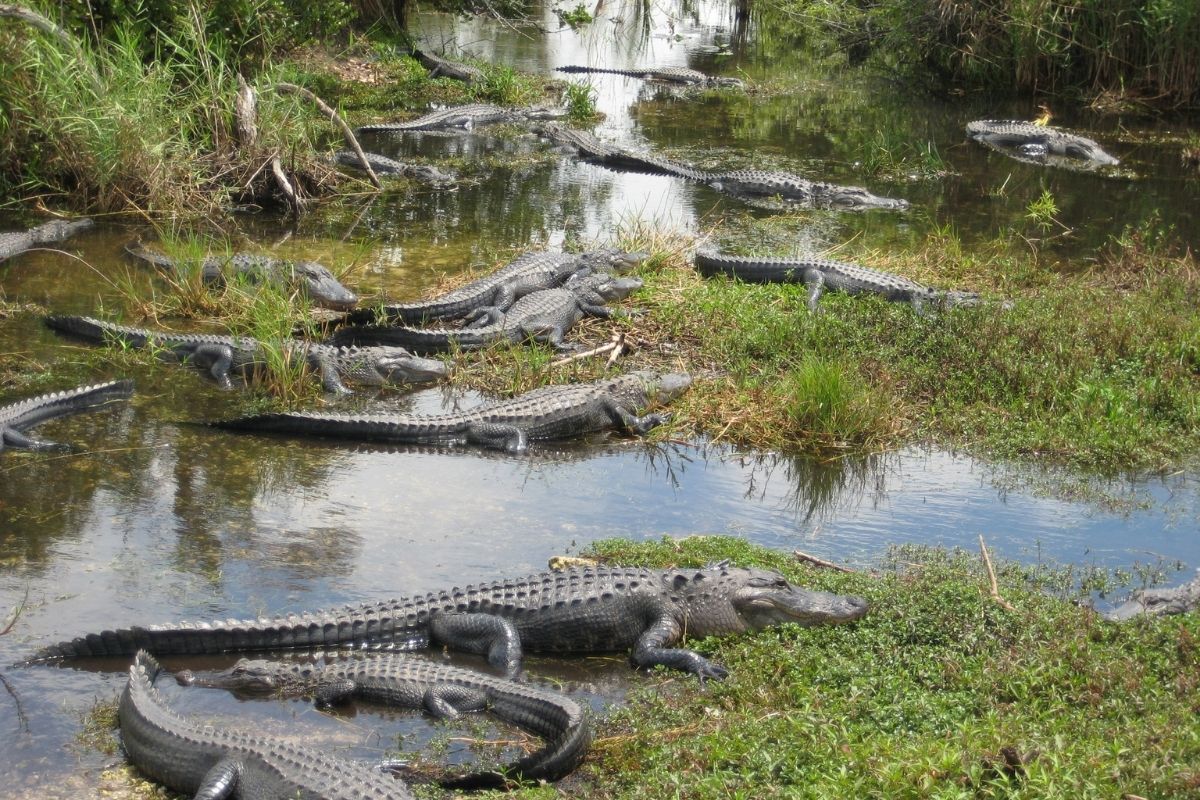 The weather is a major issue for much of the year in Florida.

In addition to high temperatures and humidity levels, the Sunshine State gets a great deal of rain and has an official hurricane season.

Thankfully, there’s a reprieve in the late winter and early spring months, when the weather is gorgeous, there’s relatively little rain, and even bugs are at a minimum. This is exactly why the Everglades is a perfect choice for a March visit when you’re deciding on the best national parks to visit by month.

Without question, wildlife is the star attraction at Everglades National Park, and viewing opportunities are abundant in March.

It’s a great time to watch migratory birds, and alligators and other marine wildlife frequently sunbathe, soaking up the sunshine and enjoying the mild temperatures.

March is one of the busiest times to visit the Everglades, but it’s relatively easy to spread out and find your own corner of the park. Just plan ahead and make tour reservations in advance. 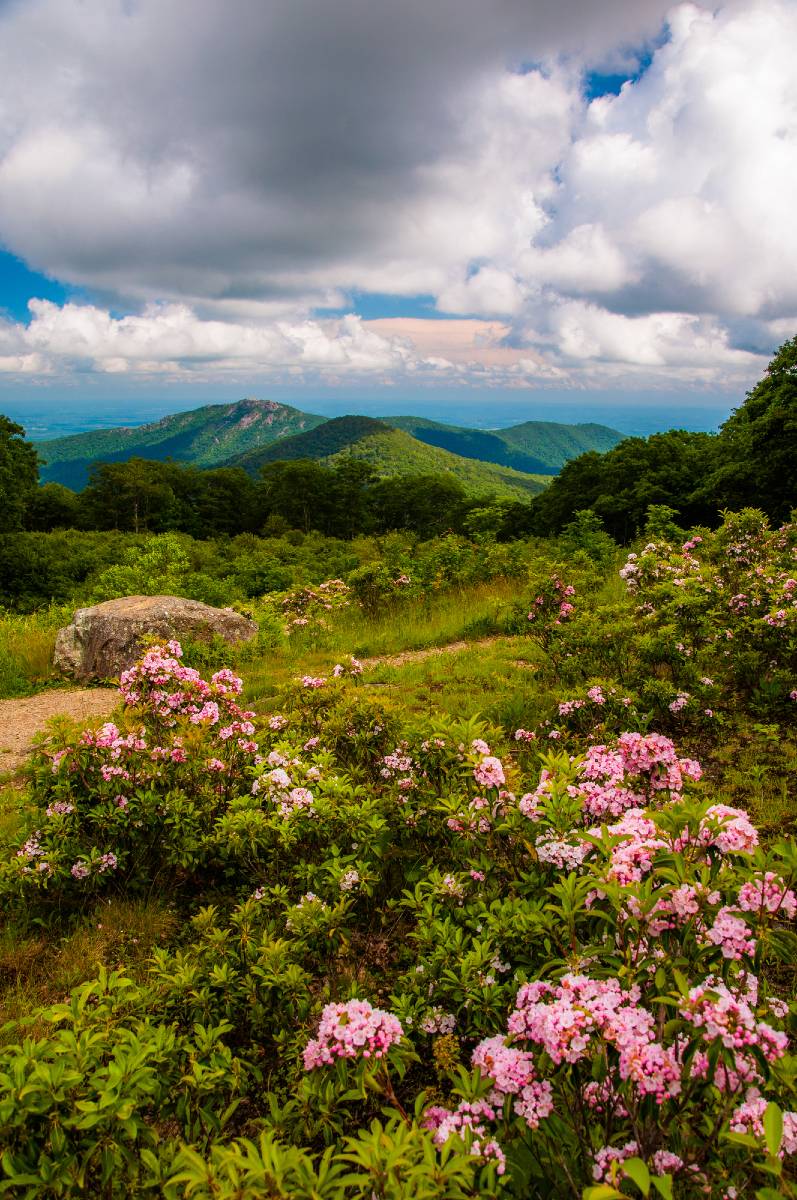 If you’re wondering about the best national parks to visit by month and you’re particularly interested in wildflowers, it’s hard to beat Shenandoah.

After a long, cold Virginia winter, the park’s 850-plus varieties of trees and plants begin to bloom again, displaying vibrant pops of color. Wildlife is also especially active in the spring, eager to stretch their legs and soak up the sunshine.

Shenandoah has dozens of hiking trails, ranging from easy to strenuous, and spring is one of the best times to explore them.

You can also drive the world-renowned Blue Ridge Parkway, which connects to the park via the scenic Skyline Drive. And just two hours away in West Virginia is America’s newest national park, New River Gorge, another fantastic choice for national parks to visit in the spring. 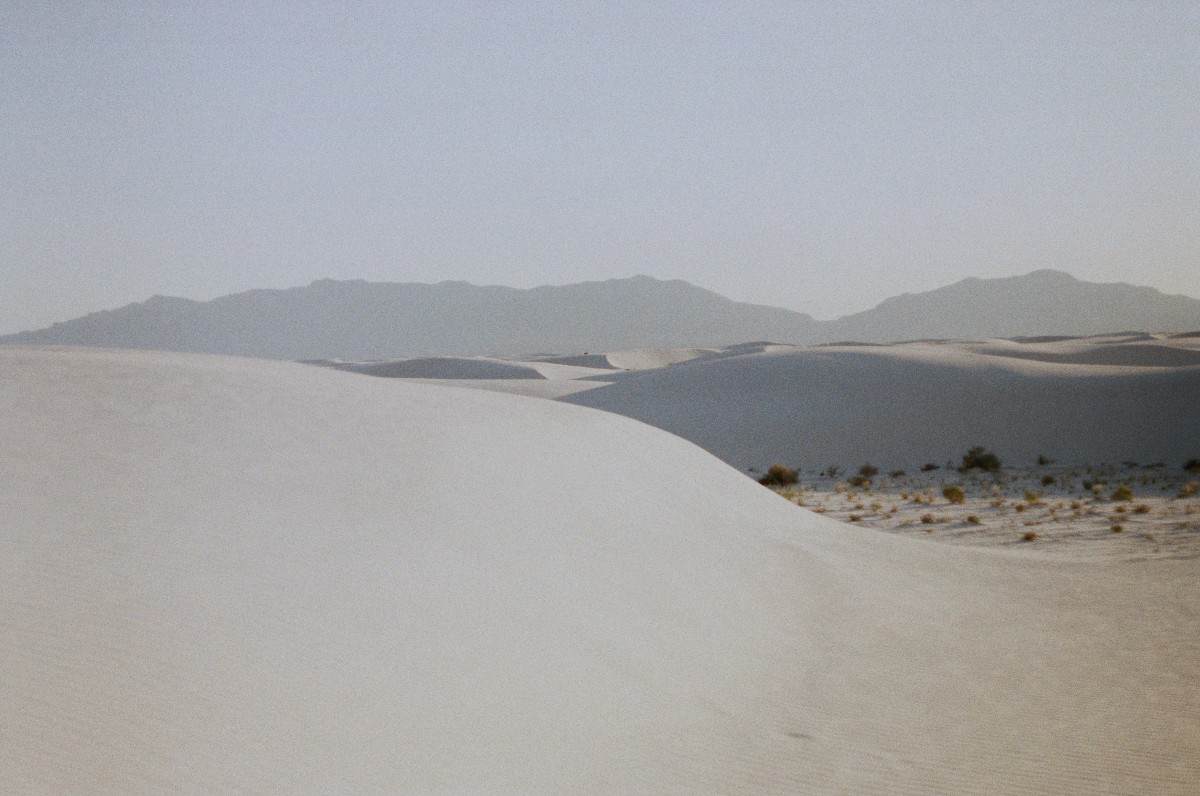 As one of the smaller, less crowded national parks, you don’t ever have to worry much about traffic or lines at White Sands.

With its location in the Southwest, however, extreme temperatures are a very real concern, so May is ideal when you’re considering the best national parks to visit by month. Any spring break crowds are gone, and the weather in May is beautiful, with toasty days but cool nights.

This particular national park is all about the scenery, so plan to drive around the 16-mile scenic loop and get in at least one good hike.

There are five marked trails, ranging from an easy half-mile out-and-back to a strenuous five-mile hike up and down the dunes.

Note that the trails at White Sands are fully exposed and have no shade whatsoever; bring plenty of water, snacks, and emergency supplies.

Best National Parks to Visit in the Summer 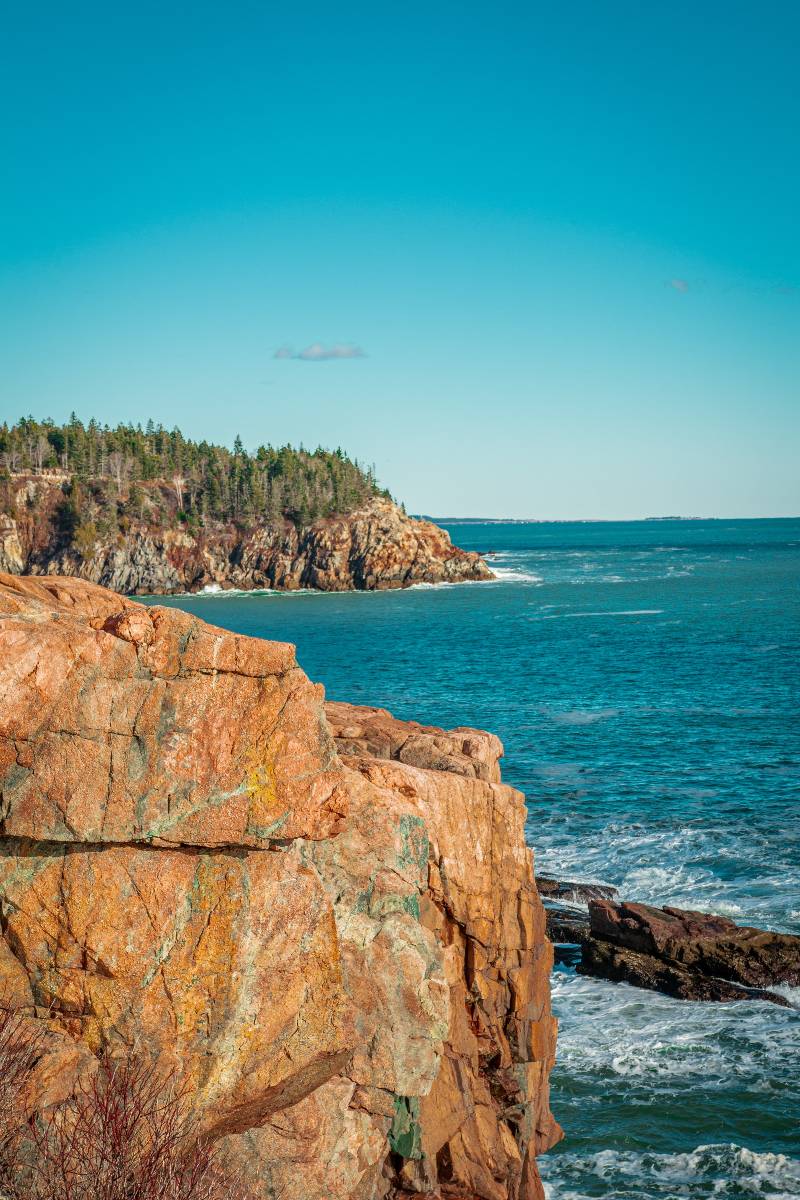 Maine’s Acadia National Park is one of the busiest in the U.S., but not necessarily in June.

With many schools not finishing for the summer until early June and temperatures just starting to warm up, Acadia doesn’t see nearly as many visitors then as in July and August.

In June, the park is also fully open and the wildflowers are in full bloom, blanketing hillsides in bright pops of color.

There’s plenty to keep you busy in June in Acadia National Park, including hiking, biking, and water activities such as kayaking or boat tours. Drive the scenic loop road, check out some of the historic lighthouses, and don’t miss sunrise at Cadillac Mountain — the first in the continental U.S.!

Note that because of all the water at Acadia, early summer means biting bugs. Pack plenty of bug spray and you should be fine! 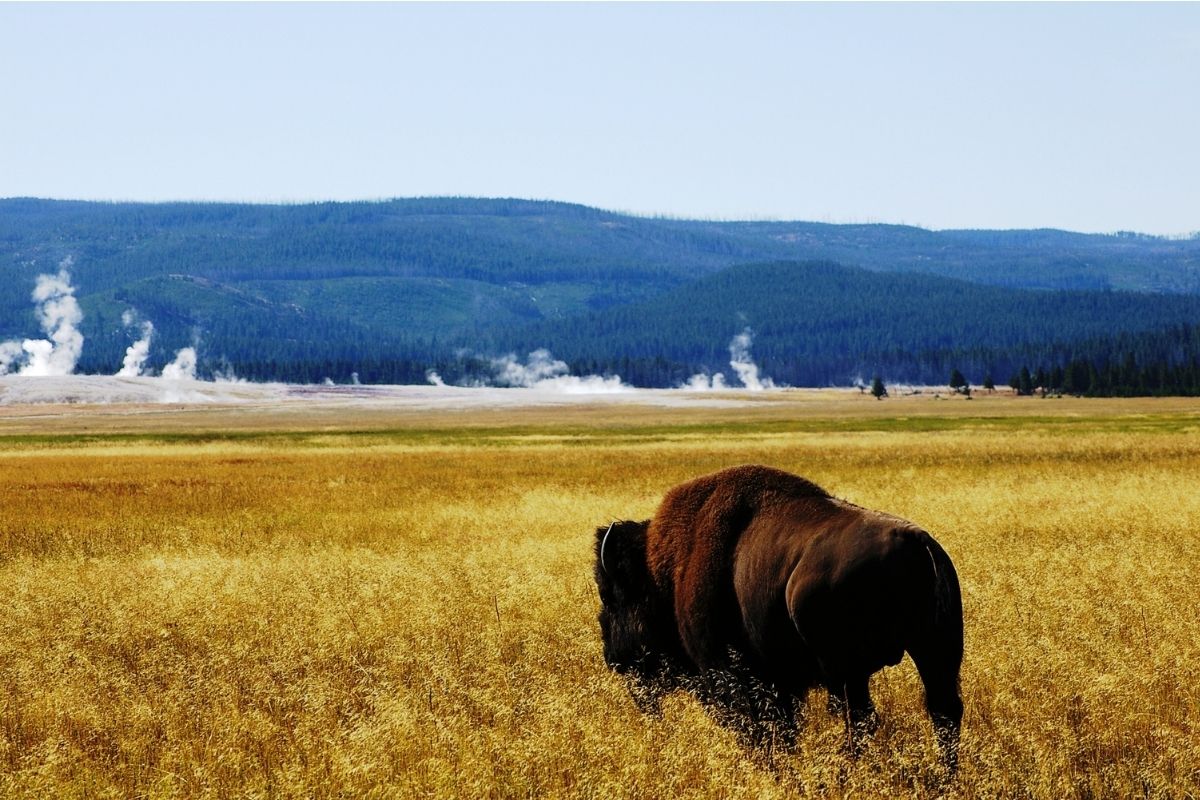 Like Glacier, much of Yellowstone National Park’s 3,472 square miles are inaccessible during the winter months.

Heavy snow forces most of the park’s roads to close from late fall through mid-spring, severely limiting how much of Yellowstone you can actually experience.

And there is a lot to experience here.

Yellowstone is one of the best national parks to visit in the summer because of its jaw-dropping diversity. Nowhere else on Earth can you spot bison, grizzly bears, moose, and wolves migrating among geysers (more than 500, in fact, over half of all geysers in the world!), massive waterfalls, lakes, rivers, dense forest, and mountain peaks.

The wildlife and geothermal features in Yellowstone are spectacular in any season, but summer is when you can experience all of it at once and truly appreciate this incredible wonder. 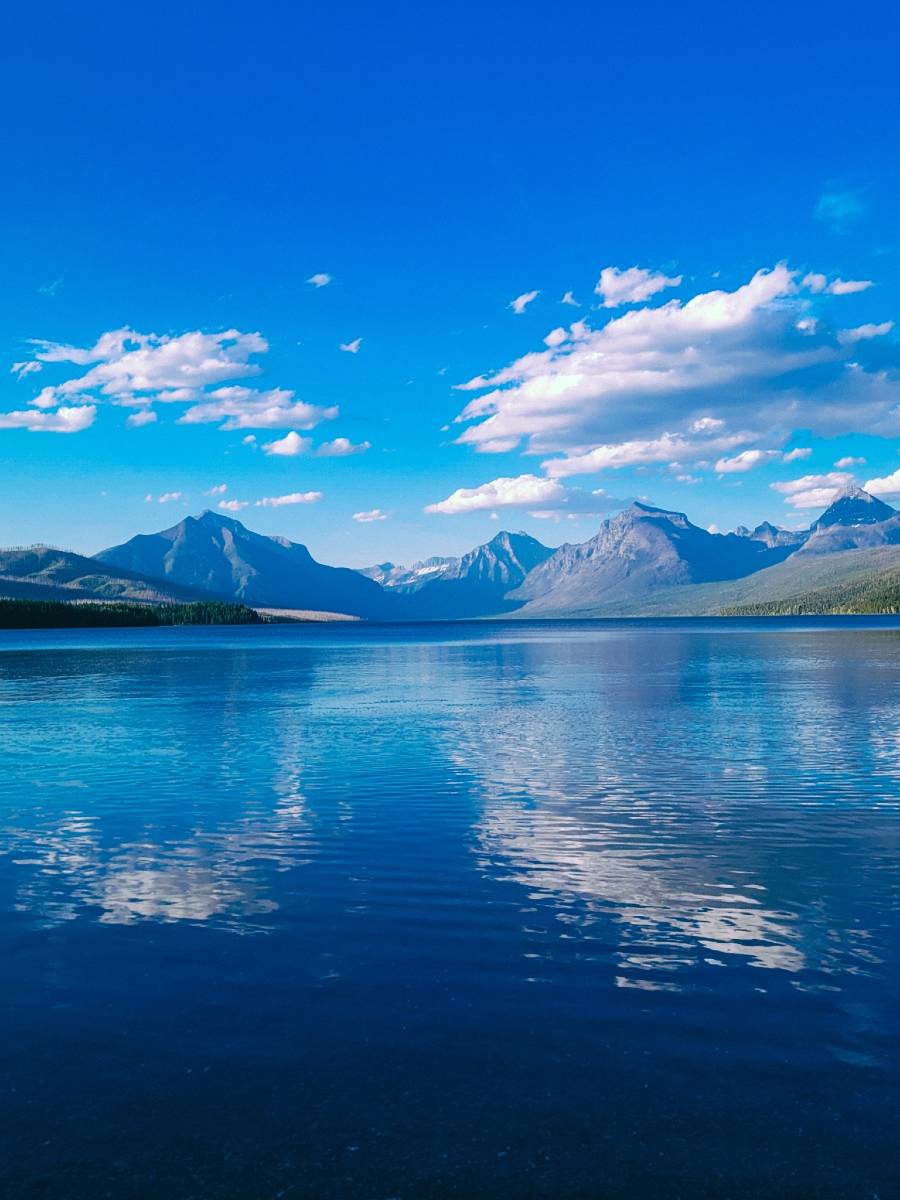 There are several national parks you can visit any time of year, and others you truly can’t.

Glacier, in northwestern Montana, is one of them, which is why it belongs firmly in the summer category when you’re deciding on the best national parks to visit by month.

Going-to-the-Sun Road, a spectacular 50-mile two-lane highway, connects both sides of the park and is easily one of the most stunning drives in the country — but it’s only open a few months a year.

Due to heavy snowfall, the road typically doesn’t open until early July and closes for the year by mid-September.

Almost all of East Glacier, the section of the park where most of the actual glaciers are, is also closed outside of the summer months.

You’ll want to see both sides of the park, some of the last remaining areas in the U.S. that are left natural and pristine, which is why Glacier is one of the best national parks to visit in the summer.

Best National Parks to Visit in the Fall 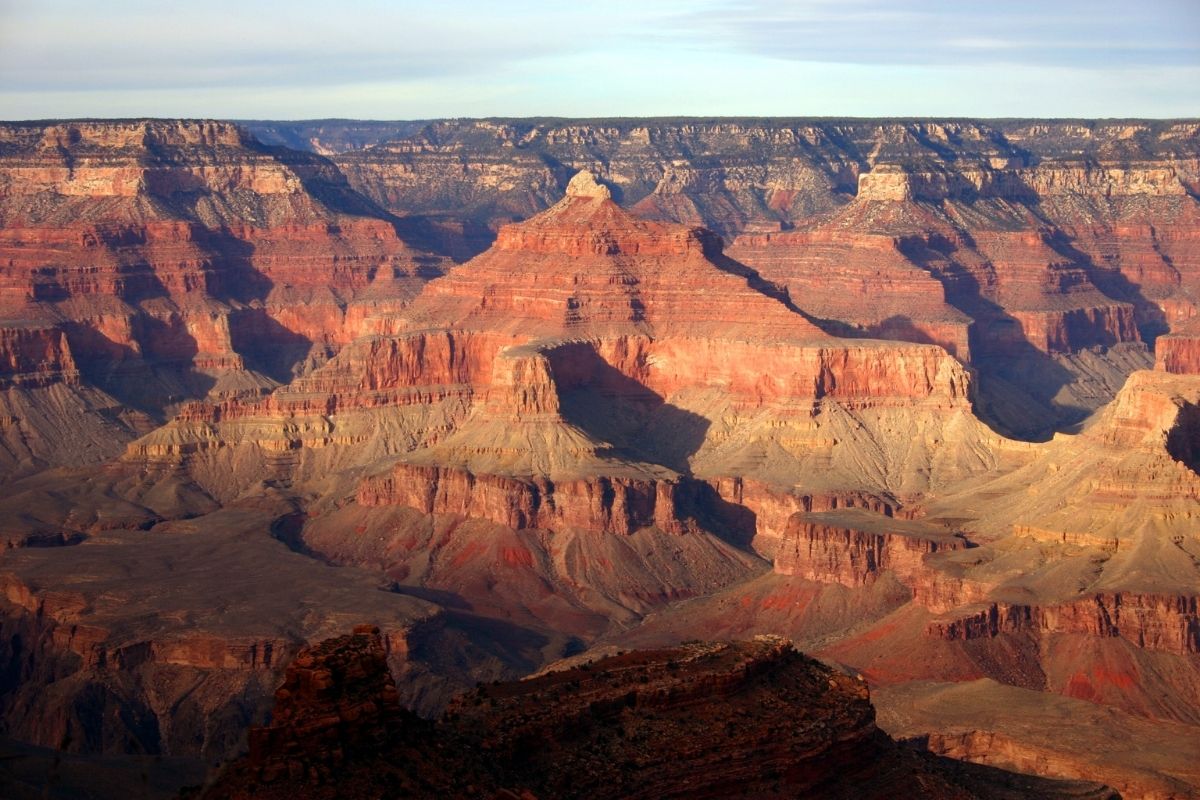 The Grand Canyon, one of the Seven Natural Wonders of the World, is one of the best national parks to visit in the fall.

It’s considered “shoulder season,” when the park is fully open and the weather is ideal, but summer crowds have thinned considerably. The shorter days are also perfect for catching gorgeous desert sunrises and sunsets.

Autumn’s warm days and cool nights are ideal for hiking, camping, and rafting or kayaking on the Colorado River.

Fall is the least rainy season in the Grand Canyon, but be aware that the weather becomes more unpredictable as winter inches closer.

The North Rim entrance also closes entirely for the winter, typically by mid-October.

If you plan to visit both the North and South Rim (and you should!), keep this in mind and time your visit for early fall. 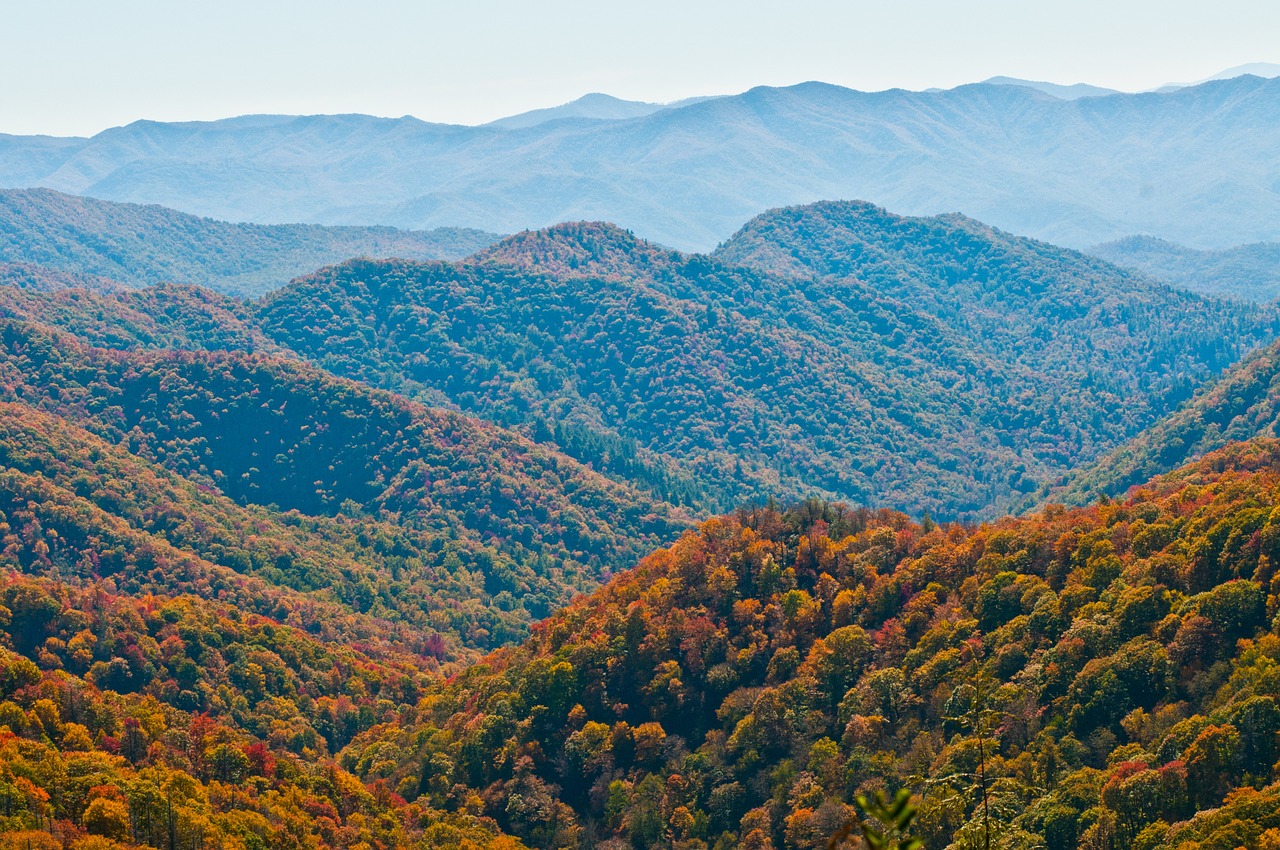 As the most visited national park in the U.S. — by far, Great Smoky Mountains is a fantastic destination all year.

However, it’s one of the best national parks to visit in the fall in particular. The weather is beautiful, with warm days, cool nights, and the stifling humidity of summer long gone, and the crowds are more manageable.

Perhaps the biggest reason to visit the Great Smokies in the fall, though, is the spectacular show of changing fall foliage. The park’s trees turn color from high to low, starting at higher elevations and working downward in a striking, vibrant line.

Peak color tends to be in mid to late October, although several factors affect the timing and it may be a couple of weeks earlier or later.

Driving anywhere through the park is a must-do in and of itself, but for the best leaf-peeping opportunities, drive Foothills Parkway and Clingmans Dome Road. 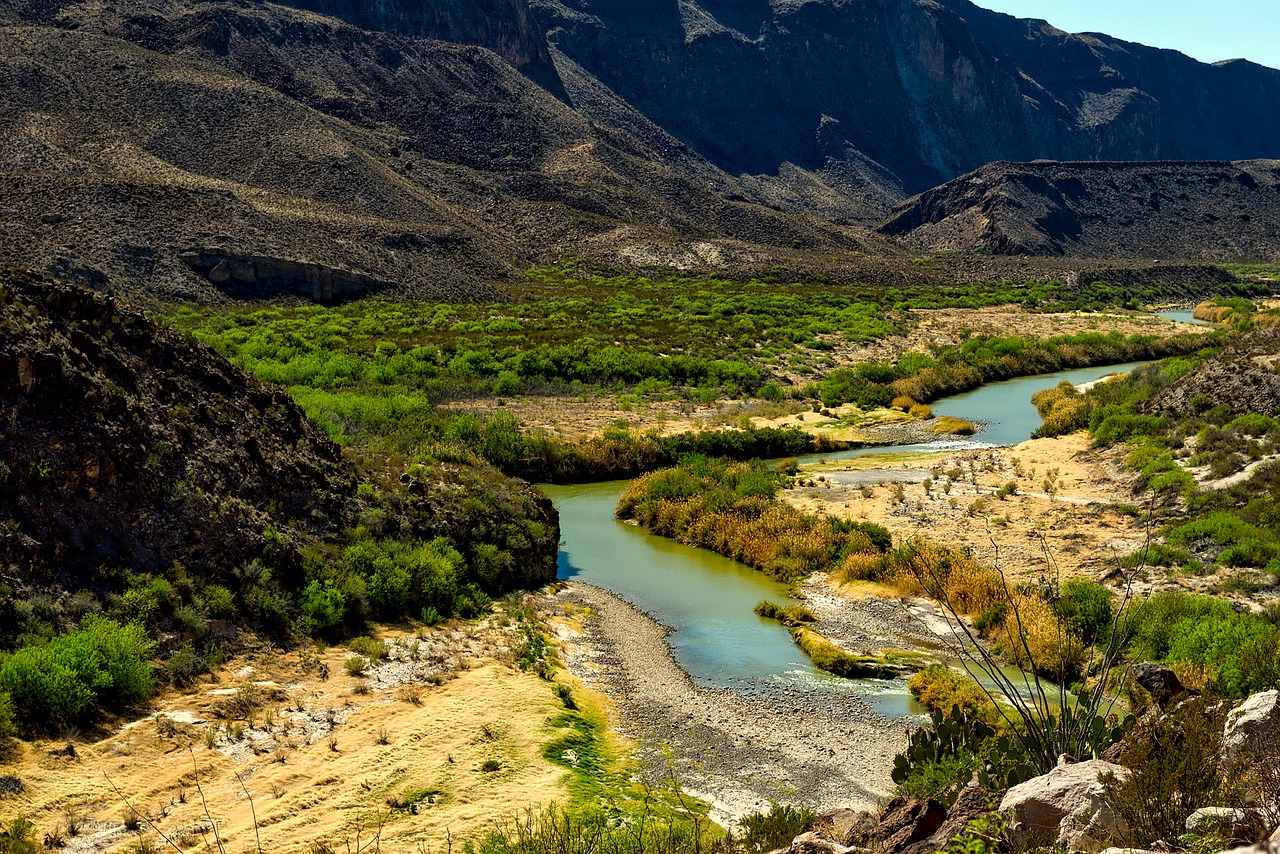 Arguably one of the nation’s most unique national parks, Big Bend sits directly on the international border between the U.S. and Mexico in west Texas.

The park is tucked into a remote but stunningly beautiful area and contains a little of everything: mountains, high and low desert terrain, and of course, the mighty Rio Grande River.

The Rio Grande itself offers up plenty of water recreation as well, with opportunities to kayak, canoe, or go rafting.

Please note that because the river serves as the international border, you’ll need a passport for any water activities at Big Bend.

Best National Parks to Visit in the Winter 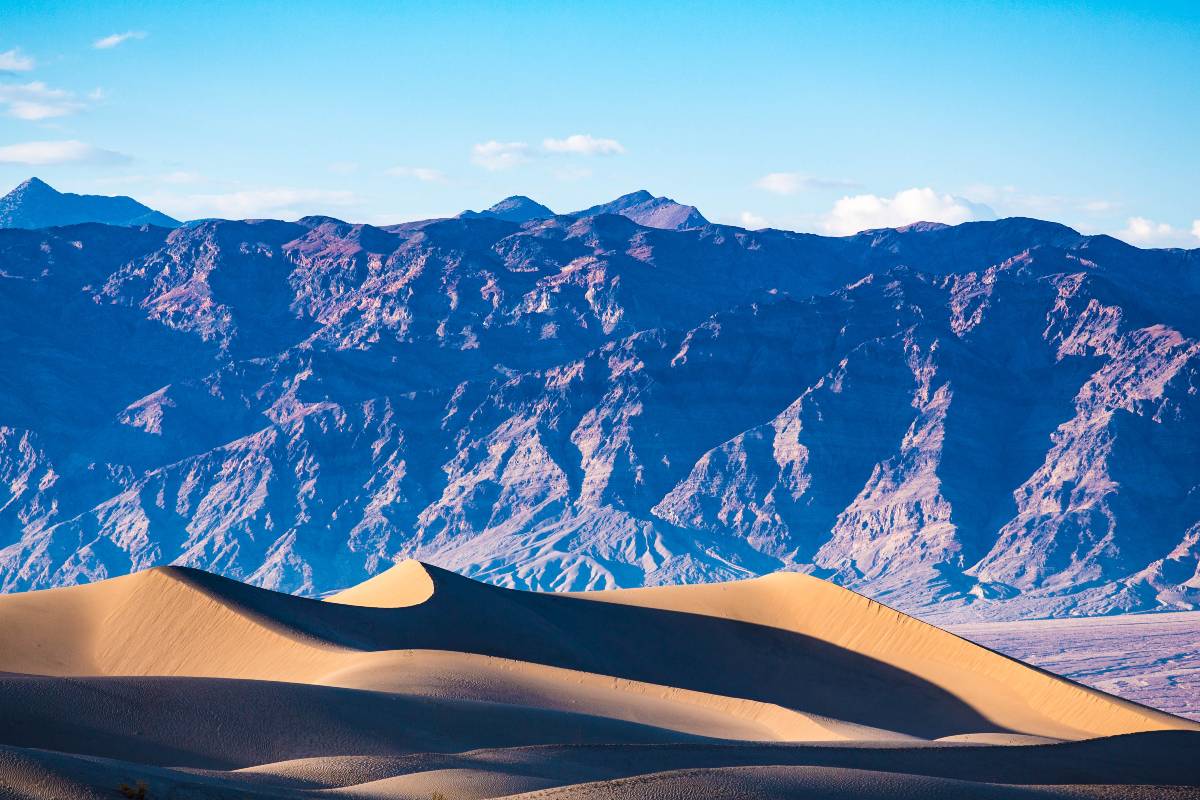 There is much more to explore in Death Valley National Park than most people realize.

The largest park in the lower 48 is the hottest, driest place on Earth, yes, but it’s also home to the lowest point in North America — Badwater Basin, 282 feet below sea level — and 11,000-plus-foot mountain peaks.

But you’ll want to do it in the winter months, because Death Valley’s extreme conditions make it unsafe to be outside for much of the year — which is why it’s one of the best national parks to visit in December. 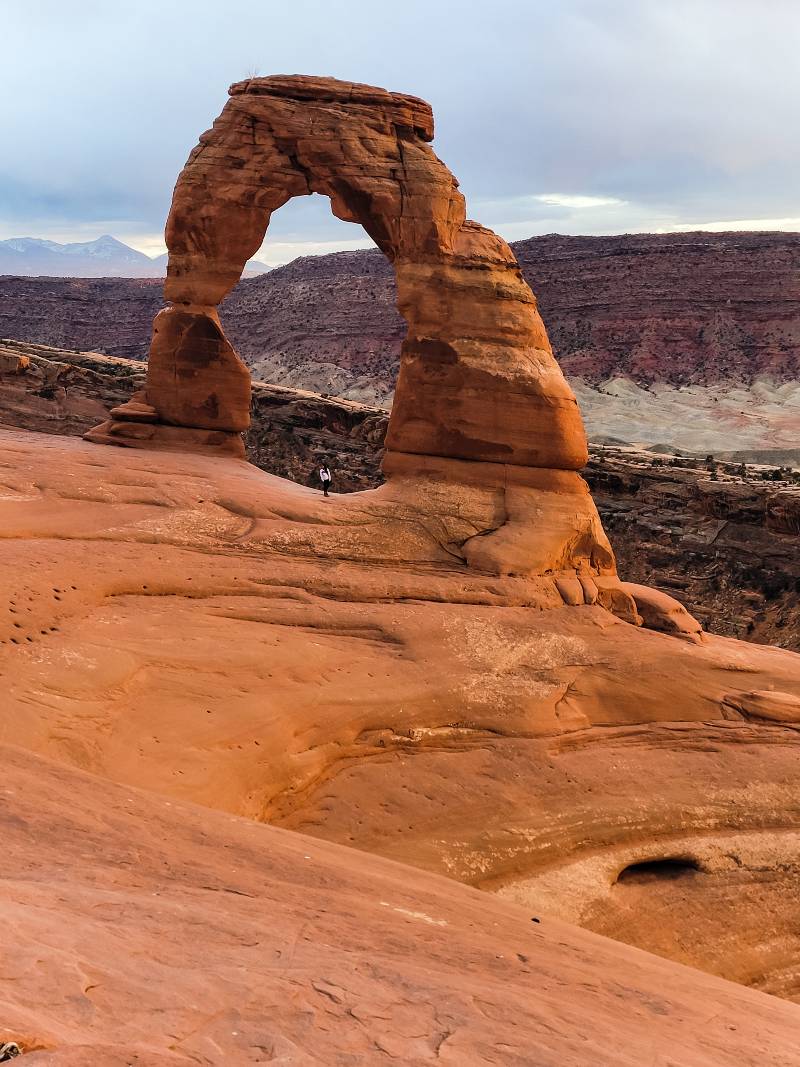 This one is technically two national parks, but they’re right next to each other, so it’s almost criminal to visit only one.

Arches and Canyonlands national parks in Moab, Utah, are also as different as could be — Canyonlands is defined by dramatic, expansive canyons carved out by the Colorado River, while Arches is, as you might expect, home to many unique natural rock arches.

Being in southern Utah, these are some of the best national parks to visit in the winter because of the mild weather.

Crowds are a bit lighter too, but truthfully, Moab doesn’t have much of an off-season, attracting off-roading enthusiasts and hikers year-round.

If you are going to make the trek to Arches and Canyonlands, you may want to consider doing an extended “Mighty 5” road trip and also visiting Zion, Bryce Canyon, and Capitol Reef.

When you’re wondering about the best national parks to visit by month, Utah offers a ton of bang for your proverbial buck! 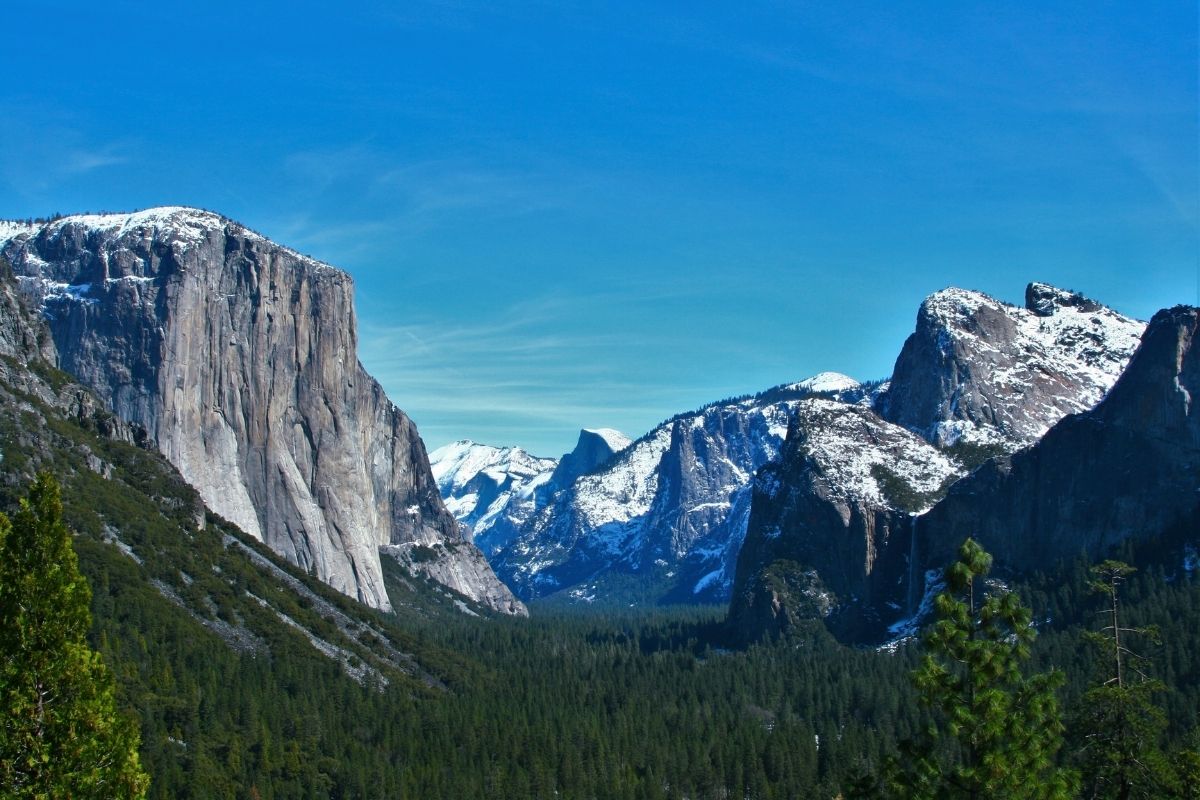 There is truthfully no bad time to go to Yosemite, but it’s one of the best national parks to visit in February for a number of reasons.

Visiting early in the season means you can ski or snowshoe at Badger Pass Ski Area. February is also the only time you can see Firefall, an awe-inspiring natural phenomenon when the sun hits 1,570-foot Horsetail Fall just right and makes it appear as if it’s on fire, glowing red-orange.

Note that weather conditions have to be absolutely perfect for Firefall to occur and because of the event’s wild popularity in recent years, Yosemite has implemented a reservation system. Tickets are typically available through recreation.gov beginning February 1st. Warm those fingers up ahead of time — reservations go fast!

Even if snow and winter sports aren’t really your thing, Yosemite is still one of the best national parks to visit in the spring. Waterfalls and creeks are roaring, wildflowers are just starting to bloom, and the local wildlife are becoming more active.

As you’re planning out the best national parks to visit by month, don’t overlook ways to commemorate the trip. There’s no rule that says you have to buy souvenirs while you’re actually traveling, so why not think outside the box and do something a little different?

If you’re planning a trip based around the best national parks to visit in the summer, consider treating yourself to a handmade national park collection from The Wander Club!

The Wander Club products also work beautifully for hinting at an upcoming surprise trip, anniversary gifts honoring a previous trip, and so much more.

Regardless of which national parks you’ll be visiting this year, The Wander Club tokens add to the nostalgia. Safe travels!

We are a charitable online shop for travel lovers! We help keep your favorite memories alive with engraved tokens and handcrafted token holders. For every order placed, we provide a meal to a child in need. ❤️